Some images are captured like magic – quickly and without hesitation. However, that was not the case with my photo shooting of the White Tower and the National Theater in Thessaloniki.

The White Tower of Thessaloniki

Being one of the symbols of Thessaloniki today, the White Tower has a long history dating back to the 15th century when the city was captured by the army of Sultan Murad II. It wasn’t until 1912 when the Greeks gained it back.

The National Theater of Northern Greece

Founded in 1961 by Sokratis Karantinos, its first Director and also a writer, today the National Theater in Thessaloniki offers much more than cultural and educational events. It’s a preferred venue for conferences, exhibitions, festivals, of local and international significance.

Going back to my story and the long evening, which I spent wandering around the White Tower of Thessaloniki, and Daria – reading a book on a bench near it. So, I was walking up and down, trying to capture the perfect composition at the best light, which may have looked funny for an outside eye. Finally, during the blue hour, I took a photo that satisfied me – with the city lights giving this violet shade around Thessaloniki White Tower. 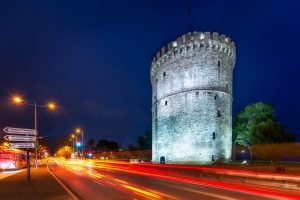 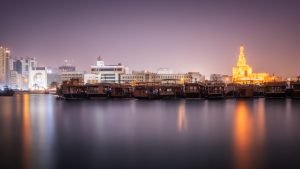 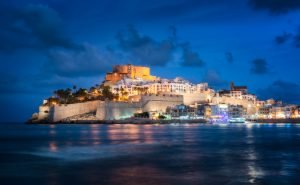