After weeks of Covid Self-Isolation, this photo marks a turning point for me. In early June, my friend João reached out, asking if we want to shoot the super moon here in Lisbon. Well, to be honest, I didn’t feel very inspired at that time.

That whole lockdown took its toll on my creativity. But checking Photopills we saw that we actually might have a decent view from our balcony here in Ajuda, as we have a good view on the famous 25 de Abril Bridge in Lisbon. The super moon was supposed to rise somewhere behind it. So since we wanted to meet for dinner anyway, we just thought to keep our cameras ready “just in case” the moon is going to be good.

It was a blissful feeling. After 3 months in voluntary self-isolation in a new country, having a friend over for dinner. If a year ago someone would have told me how amazing this alone could feel – well, I’m sure you can relate to that.

As we sipped our wine and enjoyed our dinner, we saw the full moon appear over the horizon. It was not in the spot where we thought it would be. The sky was still too bright. We kept on with our dinner, hesitating to take out the cameras.

As the moon continued to ascend, João thought “Hmm, what if it will actually align with the bridge pillar?”. To which Daria just said “Guys, just go ahead and get your cameras. Nothing to lose, but otherwise, you may regret it.”

Over the years, I’ve learned to listen to my wife.

So there we stood on our balcony. Overlooking the famous bridge that crosses the Tagus river in Lisbon. Cameras mounted on the tripod. The composition locked in. Waiting. Hoping. Getting excited with every minute that went by, the reddish super moon slowly moving in the right position.

And there it was. For a few seconds, it appeared as if the Lisbon Bridge just installed a huge lightbulb. There are no words that would do justice to describe the joy I felt witnessing that moment. ❤️

If you came here via Google, you may wonder how to take a photo of the upcoming super moon. So here is some small advice to get you started: 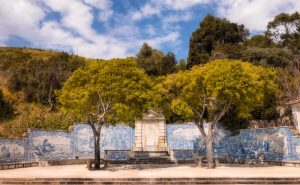