To capture the St Mark’s Basilica and the St Mark’s Campanile (the bell tower of the basilica) with the morning sky, we had to wake up at 3:30 am. Half an hour later, we reached St Mark’s Square and there were still people sitting on the chairs of cafés and finishing their day after their celebrations.

We sat there too, observing the light changing and the people changing. Around 5pm, there were tourists that arrived to see the empty La Piazza. Just before the sunrise, the first photographers started to set their tripods and after that moment, when the sun raised from behind St Mark’s Basilica, the life of the busy square started again.

After post processing this photo, I noticed that St Mark’s Campanile appears as if it is leaning to one side. It reminded me of a story of the bell tower in July 1902. In the first days of this summer month, some noticed cracks on its surface. A few days later, the Campanile collapsed and buried a large part of the square under bricks. Thankfully nobody died, apart from the tower caretaker’s cat. 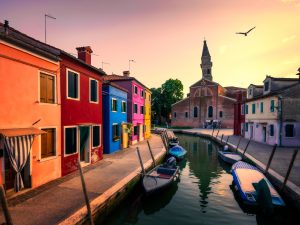