The Bâtiment des Forces Motrices, also known as BFM in Geneva, is a building, which immediately put me under its spell. During an evening stroll through the second largest city in Switzerland the sumptuous illuminated building in the middle of the river Rhône caught my photographic eye in a heartbeat.

The BFM was originally constructed between 1883 and 1892 as a hydroelectric power plant and was used as such until 1960. In 1988 the city of Geneva declared the building to be protected as a historic monument and for a long time it had no purpose until the Opera in Geneva was renovated in 1997 and a temporary venue was needed. The old machine hall was turned into an auditorium with 945 seats. What was originally an interim solution is now a popular location for ballet shows and operas.

This is how the BFM shines every day with its new purpose and played not only a major part in the industrial history of Geneva but also in its cultural history. Additionally it is just a real eye candy and not only during the blue hour, as seen in the picture. 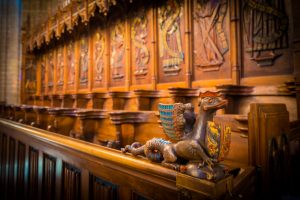