The perfect composition for me!

And of course, noone would be crazy enough to try to anchor a ship to these rocks. The story concerns all of Menorca but mainly the Cavalleria Coastline in particular. Wikipedia explains that during the Roman occupation of Spain, there was an increase in trade between Italy and the western Spanish territory. This, as consequence, attracted pirates who took their seat on Mallorca and the Menorca Islands.  Centuries ago, the Romans invaded both the islands and took them under own control.

In one of the upcoming photos, I will show you a little more of the old Roman fortress that has remained down to our day. As for this photo, I can only say that I am very glad that I managed to capture it! We had to leave early in the morning to reach this location with the aim of capturing the sun rising over the cliffs however, this failed as the position was unsuited. When we had finished, I nearly sat on the bus that was waiting for us and I could see the sun reflecting on the sea.

And that was it – the perfect composition for me!  With that, I grabbed my camera and start to shoot again… 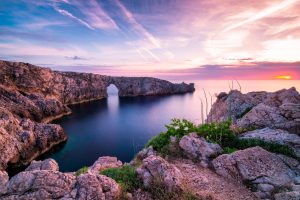 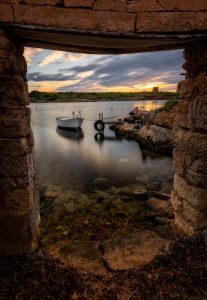