It is untypical for me to take this shot of a statue overlooking the city of Madrid. This image was taken from one of the balconies of the Almudena Cathedral while on our February trip to the capital of Spain, Madrid.

The sculptures on the terrace were very dominant – distinctively larger than an average sized person. They depict evangelists, Christian Saints and members of the Royal Spanish family. Standing at over two meters high, some of the statues had their “faces” directed into the sky – as if they were looking over the city into infinity.

The Almudena Cathedral in Madrid is relatively new – construction beginning in 1879 and officially completed in 1993 when Pope Jean Paul II visited Madrid and consecrated the church. Thanks to the Gothic Revival style, however, it gives an appearance that the architecture has stood there since the Medieval Period. The bronze and marble that defined these sculptures, deepened this impression even more so.

The statues on the terrace of the Almudena Cathedral were witnesses to the Spanish Civil Wars and the expansion of the city’s borders. They have in effect, watched on as the city slowly modernised and developed; with the quirky coffee shops and chic cocktail bars opening where historic establishments once stood. In retrospect, they continue to watch on, long after we cease to exist.

When I realised this, I just had to take this shot. It’s likely that this photo will live on, much longer than us and will be witnesses of this sunny day, alongside these bronze statues… gazing on into infinity. 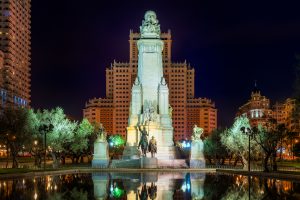 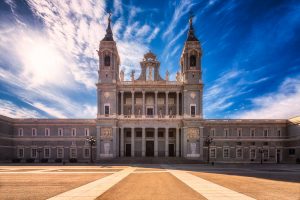