I love South East Asia for the number of skyscrapers and the views which you can have just from your home. In Singapore, as in Kuala Lumpur, I searched on Airbnb for flats where I would have the perfect view, this time on Marina Bay. And I found one! This photo was made on our last day from a balcony of the building where we stayed in Singapore just in the minutes when the sun was rising over the horizon.

Singapore consists of 63 islands, two of which were man-made. Being one of the original Four Asian Tigers (the other three are Hong Kong, Taiwan, and South Korea), Singapore of today has managed to surpass them in terms of economy and technology. Though it’s a city/country with very limited territory. As a result, there are mostly skyscrapers in the center which gives people more space “vertically”. Thanks to that Singapore has remarkable cityscape, which is photogenic in all weather conditions.

Actually, it was nice going on photo tour at sunrise by just jumping from your bed and taking only a lift to the photo location! 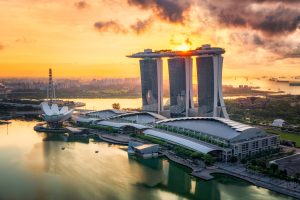 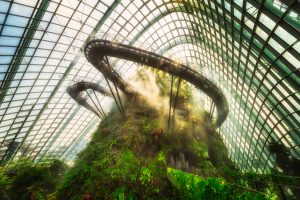 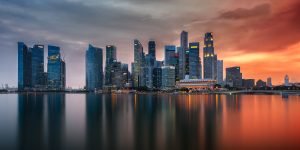