The Three Towers of San Marino are visible from a great distance when you drive through this country. Each of these medieval structures have their own “character”, name and history.

The names of the towers are: Guita, Cesta and Montale. The first tower is the oldest – it was built in the 11th Century. What you can see in this photo though, is a passage between Guita and the second tower – Cesta. This beauty was actually my favourite one to photograph. It was built on the top of Monte Titano on which San Marino was built.

The slope travels down sharply just under Cesta. When approaching this tower from Guita, you can see the Apennine mountains in the background and if you look long enough, you will see Rimini and the sea. Cesta was built in the 13th Century where the Roman fort once stood. The location was perfect – the tower was hardly approachable hence, it could defend itself from invaders.

Passing the bridge in the early morning hours to the second tower is an unforgettable experience. You can feel the breeze from the sea on your face and observe the sun rising over the mountain landscape. Be sure not to miss it, if you’re ever in San Marino! 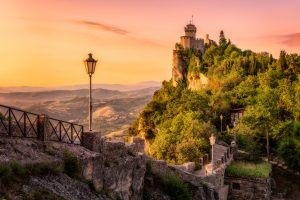 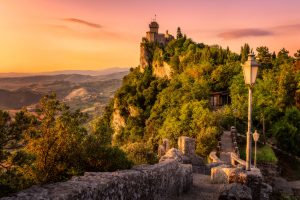