Amsterdam canals are like well-known notable landmarks e.g. Paris’ Eiffel Tower, Berlin’s Brandenburg Gate, and Rome’s Colosseum.  Contrary to symbols of other cities, there are multiple that you can see wherever you go in the center of Amsterdam.

Papiermolensluis is a stone bridge over one of the canals. It is probably one of the most photographed landmarks, due to the composition of the houses as you can see in the background and the canal in the foreground are perfectly depicting the “atmosphere” and the architecture of Amsterdam.

Back in time, on the corner house of Brouwergracht, was a hanging sign “De Papiermolen” – paper handler. The bridge was called Papiermolensluis because you can see this sign of the shop from the bridge. The bridge has also been known under the name Oliekoekensluis meaning oil and pancake as bakers used to sell it on their stalls. 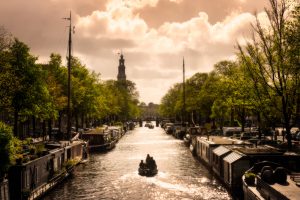