When you search for accommodation in Amsterdam, you will immediately see numerous advertisements to rent a space on a houseboat. To begin with, I thought it would be a cheaper alternative, but once I saw the prices, I was astonished with the high rates.

These houseboats served as shelter

So, what do we know about these houseboats in Amsterdam? In previous times, these houseboats served as shelter for people to allow them to live and avoid the sky-high rent charges. The metal houseboats were primarily used to transport goods to and from Amsterdam. The owner of a boat would usually live together with his family and following his retirement, he would anchor it somewhere on the Amsterdam canal and would then continue living there.

Aside from the metal houseboats in Amsterdam, you would also see more “flat” boats, that appear as floating houses. I’ve read that locals call them “modern arks” as you can see in this photo. They were never to be used for any other purpose other than to live and they were fixed in one place on the canal.

After the second world war, there was a shortage of housing in Amsterdam. People then moved to live in boats on the water. Back then, they were not so comfortable compared with our day now, but at least they were cheap. With decades passing, houseboats have become more popular as an essential part of Amsterdam’s landscape, eventually becoming a main tourist attraction. In the end, I believe it’s a unique experience to enjoy a stay on such a boat, especially if you have it docked somewhere on the canal in Amsterdam’s center. 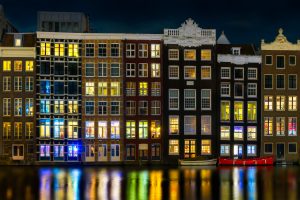