As a person who likes big sporting events very much, I find this marble stadium simply amazing. I guess that all fans of the Olympic games and their history, would love to see the impressive Panathenaic Stadium in Athens with their own eyes.

Historical flashback of the Panathenaic Stadium

The Panathenaic Games, organized in the 6th century BC, were actually both religious and athletic festival that took place every 4 years to honor goddess Athena – a patron of wisdom, craft, and war. At that time no special seating was available for the spectators, so they used the natural slopes around to watch the games.

Interesting facts about the ‘Marble Stadium’

‘The marble stadium’ is the only one stadium in the world, built entirely of marble. It should be noted that the opening and closing ceremonies of the first modern Olympic games in 1896 were held there. Additionally, The Panathenaic Stadium is the finishing point for the Athens Classic Marathon, which is organized every year at the beginning of November.

Today the Panathenaic Stadium in Athens is not only a venue, related to the Olympic games but also a popular place for large-scale concerts. When I watch some big sport event on TV, I remember this remarkable construction that was recover for the modern people from the Antiquity. 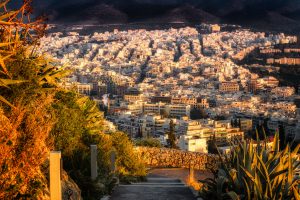