What makes a full moon ‘super’, is that it appears 14% bigger and 30% brighter than when it would normally appear. So, this astronomical event lit up the November sky and became a breath-taking experience for star watchers and photographers around the globe. It began in Australia, moving through Japan and into China and finally reaching Europe.

Frankly, I was expecting the moon to be a little bigger but, I wasn’t disappointed for long. The view from the Berlin Cathedral on the Berlin TV Tower accentuated such structures as the Nikolai Viertel and Rotes Rathaus, appearing so spectacular during this blue hour. I was very thankful for the Cathedral’s administration, as they allowed me to capture photos from their balcony, which would usually have been closed for the public. 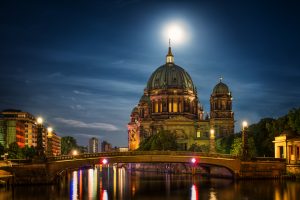