If you amble along the Kurfürstendamm or the Tauentzienstraße you can occasionally get a feel for how Berlin must have looked in its Golden 20s. Be it the ladies at the sides of the street, marvelling at handbags that can cost much more than 1,000 euros. Be it the gourmet who goes to the KaDeWe, the glamorous “Department Store of the West” to purchase an exclusive wine for his collection. Or be it the rich heirs who take a ride with Papas new sports car up and down the Kurfürstendamm without any goal – just to see and to be seen.

More about the City West in Berlin 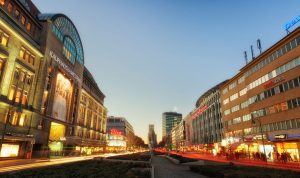