The walk that resulted in this photo actually started with other plans. I wanted to visit the famous Diocletian’s Palace in Split, Croatia but since it was crowded there, I’ve changed my mind. That’s how, Daria and I, followed the tiny, white stone streets of the city, before we arrived at this well-illuminated gate.

Split City Wall gate photo – the story behind the scenes

More resembling a fortress, the Palace was built in the beginning of the 4th century AD. The Roman Emperor wanted to have a nice residence for the days after his retirement.
Split has been founded as a Greek colony in 3rd or 2nd century BC. This Adriatic Sea city has had a turbulent history that includes falling under Venice rule, then – under Ottoman rule, and even surviving Communist regime as part of Federal Yugoslavia.
Today Split is the second-largest city of Croatia, flourishing as a popular tourist destination. Have it in mind next time you make your vacation plans! 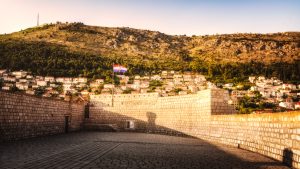 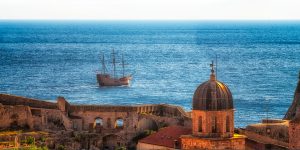