Sometimes you put your feet in some place and you have the feeling that it could be your second home. This feeling we had once we reached Radazul Bajo in Tenerife. And even months after our return to Berlin, we keep our weather application on our phones switched to show us weather there. Also, when the days in Berlin are grey and not so great, we tend to repeat “let’s just move to Tenerife”.

November is a special month in Europe. You could say it has some magic in the morning fog and the early evenings are just inviting to spend your time in small bars and cafes. There are also downsides of this month. Lack of sun, chronic lack of vitamin D and for Nico lack of palm trees around. When nostalgic romantic spirit of autumn 2016 transformed for us into depressive spirit of living-all-the-time-in-darkness, we thought to leave Berlin for few days and we decided almost immediately to fly to one of Canary Island. 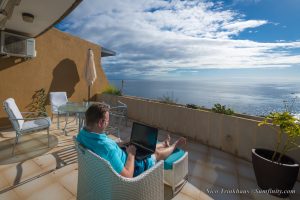 It took us with Nico few minutes to book the flight to San Cristobal de la Laguna after we googled „the sunniest places in Europe in November “. Fact, there was not much choice – the rainy mood seems to spread over Europe in this time. However, what we found about Canary Islands surprised us enormously. The all Canary Islands seemed to offer sunny weather, palms and turquoise view on Ocean. And Tenerife… Tenerife seemed to us to be different to all…

Do you know that in one small island you can have four (it’s not hyperbole) seasons of the year? With drive, over 20 km further north or south you can either experience summer or winter. This vision was too crazy for us to say it’s truth – don’t trust blog articles until you experience it by yourself. The prices of accommodation and renting car after first research appeared to us to be very friendly, so we didn’t hesitate too long.

The best place to stay – there where is the eternal spring

We chose place where the eternal spring lasts all year long and temperatures are between 20 and 25 degrees. The place had a melodic name Radazul. It is located south of Santa Cruz and Anaga Mountains, but still on the north from El Teide volcano. It’s rather small town to compare to other cities in this part of island, but therefore is not so touristic. We stayed in the part which calls Radazul Bajo and it’s located right on the coast. Advantage of this location is that, you have plenty of flats to book on air bnb with a view over the Atlantic. And what you need more to relax as sound of ocean as lullaby to sleep?

Another reason why we were happy with Radazul, it’s because it’s mostly sunny even though in the mountains and towns around it’s raining. Somehow the topography of this place created there eternal spring there. The wonderful thing was also, that you could see the shores of Gran Canaria as it would be distance of maximum 15km, while those two islands lay 134 km away from each other. 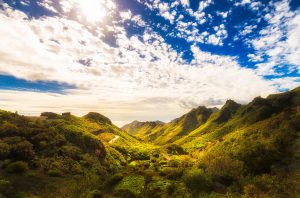 So, what is special about climate of Tenerife?

We found the flight to Tenerife from Berlin, trough Madrid to be long. However, when we looked on the map of all globe, we realized that we are on latitude of Sahara! It was so obvious it’s more south than Spain, but somehow because of pictures of tropical island we didn’t connect it to the largest desert of the world.

Not everywhere though climate is the same on Tenerife, which you should have in mind while booking your hotel or apartment. Because of ocean’s current the northern part of island is colder and experience a lot of more rain. The most of humidity gathers in Anaga mountains. La Laguna was the first city where we realized that we always should check temperatures before going to some location, even if it’s only 20 km apart from sunny and warm Radazul. On this day, while in our temporary home we’ve experienced 25 degrees in La Laguna was raining and it was only 16 degrees.

The most surprised we were though when we started to plan to climb to El Teide. We somehow imagined that it will be cooler on the top, but our autumn cloths for climbing will be enough. They weren’t – on Teide it was minus 6 degrees. Instead of climbing Teide then and experiencing winter which we left in Berlin, we headed south, searching for eternal summer.

When we were following the road, which goes around Tenerife we were constantly noticing changing of the landscapes. First, there were thick deeply green forests around us, then the trees got smaller and less intensive in colour, soon there were only brown-green bushes around. As the time passed we saw just grass in front of us, then rocks and mars planet -like landscape which reminded a desert.

When we reached Los Cristianos there was full summer-season. People were wearing shorts and swimming suits (not like us thick jackets). There were plenty of tourists strolling around, passing typical seaside promenade streets, buying sunglasses and counterfeit of Michael Kors bags.

I’m not sure if there is other such place on earth as Tenerife, where with one hour drive you can pass at least three-year seasons. This variety of climate influenced the landscape of the island. From the cloud, moist forest which is providing island with fresh water to the cool top of Teide and dry desert-like landscape on the South – the island provides you all possible experiences of climates. You can think it’s current or trade wind, but you can also think there is something magical in this place.